Has your game gone to the dogs? Dogging it is an expression describing weak play on the end of a hand. If you’re not familiar with the expression, I’m sure you’ll be familiar with the following poker scenario. We’ve all been witness to a player raising pre-flop from early position and catching a couple of callers. He then leads out with a continuation bet on the flop and culls the number of opponents to one. He continues his aggressiveness on the turn only to be called again. When the river delivers what appears to be a total brick, our hero checks and his lone opponent checks behind him. At the showdown, our hero finds out that his lone opponent is holding a busted straight or flush and has nothing. The problem becomes his opponent’s “nothing” is a tad better than our hero’s “nothing” and he loses to a high card.

It is at this moment of revelation that you can almost hear one player’s teeth begin grinding as he realizes that if he had fired one more barrel he would have been stacking the pot instead of watching his opponent stack it. Now, in addition to the teeth grinding you can read his mind which is saying, “Damn, a bet on the end would have taken down the pot” as he silently rues not continuing his aggression. How about this for a major revelation? If you do not believe your hand can win heads up at the showdown without making your opponent fold, realize that unless you bet your opponent will not be folding! Usually, players do not fold to a check – especially when their opponent will be obligated to show his hand first.

Poker players that dog it regularly do so because they believe they are throwing good money after bad. They believe at the river that they have been beat all along and try and save any additional bets as well as the embarrassment of being called down and having to show their hand. This is pure nonsense! When did these folks begin believing they were actually playing poker? That mindset is the antithesis of solid, wimp free poker.

There are not many players who would employ a bluff raise on the river when the board is raggedy, not showing any real threat, coupled with an opponent who has shown aggression right from the start. If you are raised, you can fairly confidently throw your hand away believing that either you were beat all along or that the river rag somehow did help your opponent. The obvious key to this play is being aware of the texture of the board. Was your opponent on a flush or straight draw or was he calling with middle pair or just over cards? Analyzing the board should provide the necessary clues. If there was no draw on the board then proceeding with caution may well be in order. However, if a draw did exist right from the flop but never got there, your opponent may well have been chasing that missed draw and will release his hand to another bet now that there are no more cards to come.

While this play is really a no-brainer in limit hold’em due to the odds the pot will be offering on the river with the risk only being one more large bet. It does become a little dicer in no-limit. However, the concept still holds true and the proof is in putting yourself on the opposite side of the equation. If you had been chasing the nut flush right from the start only to end up with a hand of ace high and your opponent who has been betting all along fires again, would you call or raise? Don’t be the one on the end whose “Nothing” winds up being worse than the other guy’s “Nothing”. You need to seize the initiative and fire another bet and force your opponent to muck his “Nothing”.

What if instead of holding nothing, you hold a little something. This happens all the time as our pre-flop hands, which look so promising never improve. Imagine holding middle pair against a tenacious opponent that has called all the way. If you check and he bets half the pot, you’ll be getting 3-to-1 on a call and will probably make that call. If that is the bet you would expect your opponent to make, do not allow him to take the initiative – instead fire a bet less than you would expect him to make. This is analogous to making a preemptive strike and many times establishes the price to be paid. After all, your opponent will either fold – and that’s a good outcome, call – and now you’ve paid less than the bet you believe he would have made or raise – now may be the time to fold unless the pot odds warrant a call.

Two caveats to making these preemptive bets. First, tend to make these plays against weaker players as the stronger ones will read it properly and play back at you. Secondly, don’t make the bets too small or you will encourage even the weaker players to call. As always, whether to use this tactic “Depends” so it becomes your task to figure out the variables such as on what level your opponent is thinking. The name of the game is to outthink them! Oh, one more caveat – anything that sounds easy, normally isn’t and this is one of them. If you want something easy then play baccarat as there are only three outcomes to guess, banker, player or tie. Boring! 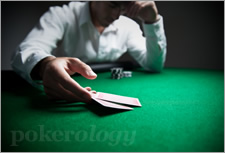 Making a habit of forfeiting pots is not the path to poker success and bankroll enhancement.