There are many types of poker players. Most are relatively easy for the good player to read. They tend to play hands within a certain range in certain situations. They tend to be aggressive, or passive, or tight, or loose, or a combination of those traits. Using your knowledge of them and the way a particular hand has been played you can generally put them accurately on a relatively small range of hands. Once you put them on that range of hands, the good poker player can exploit them – folding, raising, checking, or calling as the situation calls for.

Such is not universally true, however. Some players are so bad at poker that putting them on a hand is nearly impossible. How can you figure out what they are playing if they don’t understand even the basics of what they are doing? Exploiting those bad poker players is not so much a function of figuring out what they have but in playing your good hands strongly – expecting them to have weaker hands most of the time. You win their money because of their mistakes – and there will be many.

This article is not about that, however. It’s about the second category of player who is very tough to put on a hand: the tricky poker player.

Tricky poker players are those who deliberately mix up their play – not consistently playing the same hand in the same situation the same way. A tricky poker player may deliberately slowplay Aces from mid position one time and then play them very fast the next. He may go all in with 63off if he feels the situation is right. He may call with Jacks on the button when everyone folds to him and then, the next time he has Jacks he may fold them to a raise. He’s tough to read.

Many players work hard at trying to read these tricky players – trying to spot a tell or detect some kind of a betting pattern. Among the very best of us, we may glean some pattern, some clues, some poker tells, to help us figure out these tricky players. It’s not necessarily impossible, just very difficult. Given sufficient poker skills and powers of observation, you might be able to figure them out – discern when they are acting and when they are playing straightforwardly. And, surely, at the highest levels, that is exactly what the expert poker player needs to do to get the best of the game.

In my view, the vast majority of your profit is going to come from the other poker players – the weak players and the straightforward players. They are the ones you will be able to figure out – or who will be so bad that you will make money from them without being able to figure them out. I suggest you adopt one of two simple strategies. Neither of these strategies requires that you figure them out.

The first strategy is simple. It is avoidance. You will attempt to avoid playing against them. If they raise, you fold unless you hold a super-premium hand. If you raise and they re-raise you, you do the same thing – fold and live to fight another day. If they seem to be targeting you, because they perceive that against them you are weak tight and thus easily exploited by them, then you will leave the game and find greener pastures elsewhere. Sure, it bothers the ego to bow out from a fight like this. But from my experience, discretion is the better part of valor in such a situation. Save your bullets for opponents who move more slowly and are more predictable. Your bankroll, if not your ego, will thank you in the long run.

But avoidance isn’t always possible. Sometimes you are too much invested in a hand to fold. Sometimes you have a very strong holding but not the nuts. Not every situation is clear cut enough for you to bow out. In those circumstances I suggest you take a page out of my old ping pong strategy book. I suggest you use some “anti-spin”.

In the parlance of ping pong (more properly called “table tennis” at the competitive level where this comes into play) there is a type of rubber that is used to neutralize the intense spin that players can impart on the ball. This type of rubber doesn’t impart much of its own spin – and so isn’t very good on offense. But that’s just the point. Because it is not itself very tacky – it helps absorb the spin of the opponent – enabling a defensive return that keeps the ball in play. In a word it is “non-reactive”. Against players with the most powerful spins, anti-spin rubber is a critical ingredient in preserving the point.

In poker, “anti-spin” is useful against tricky opponents as well. It is a strategy that, as much as possible, takes the guesswork out of your play. You play as passively as you can – checking rather than betting and calling rather than raising. This isn’t to say that you will avoid any difficult decisions. You won’t (which is why I first suggested the strategy of avoidance). But your neutral style will tend to deaden the trickiness of your opponent – as you play defensively rather than offensively. 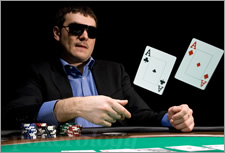 A tricky poker player may deliberately slowplay Aces from mid position one time and then play them very fast the next.