Daniel Negreanu, aka “Kid Poker,” may be in his mid-thirties now, but compared to some of the legends of poker, his career has lasted one fourth as long. However, his results compare favorably to some of the best poker players to ever grace this great game. He has won four World Series of Poker Bracelets, most recently in 2008, and has also won two World Poker Tour (WP) Events. On top of those six major championships, he has won dozens of other tournaments. Since he became a professional poker player he has won more major poker tournaments than anyone else in history, resulting in nearly 12 million dollars in tournament cashes.

While it is impossible to know how much he has won at cash games, Negreanu is a regular at “Bobby’s Room” at the Bellagio in Las Vegas, which spreads the richest stakes games in the world. Still, while Negreanu would be known for these outstanding results alone, it is his contributions to the game that have made him one of the most recognizable faces in the game today – hence his inclusion into the “Pokerology Hall of Fame”.

When “Kid Poker” truly was a kid, at around 15 years old, poker was the furthest thing from his mind. Negreanu liked to gamble, but his game of choice was snooker. After realizing there was not much money in snooker he changed his focus to a somewhat similar game, with a lot more money to be made – pool. Negreanu started skipping school for the pool halls, eventually dropping out. It was in these pool halls that Negreanu started playing poker, and using his fake ID he would play at the local casinos in his hometown of Toronto, Canada. At this time Negreanu has said he liked to gamble on everything, but despite this he was still making a decent living at poker, even before he was legally allowed to enter a casino.

When Negreanu did turn 21 he did not stick around in Canada for long, instead deciding to try his luck in “America’s Playground,” Las Vegas. Believe it or not, in short order Negreanu was sent back to Canada broke, having been taken to school by the professionals. While there, he received advice, saying he would have to cut back on other vices (such as gambling on craps and sports) if he were to succeed in the shark infested waters of Las Vegas. Negreanu returned to Toronto and pulled together another bankroll and made his way back to Vegas, this time with a new attitude. The rest, they say, is history.

All poker players have their prerogative to be accessible or not. Even the great Doyle Brunson, arguably the greatest ambassador the game has ever had, has said there have been times he wished he had not published his poker changing strategy book “Super System,” because he said it has cost him millions of dollars and forced him to change his game. That has not derailed Negreanu from following in Brunson’s footsteps, even contributed to Brunson’s “Super System 2,” writing the Triple Draw section, despite being one of the youngest professionals featured in the game.

In the summer of 2008, Negreanu published what has been called this generation’s ‘Super System’. Just like that book, “Power Hold’em Strategy” featured professionals giving their expert poker opinions on different topics. Appearing alongside Negreanu in the book are Evelyn Ng, Doyle’s son, Todd, Eric Lindgren, Paul Wasicka, and David Williams, a virtual who’s who in the world of poker today. The player who seemed to go most in-depth, talking about his own style, was Negreanu himself. He talks of his “small ball” style, which requires a player seeing a ton of hands and winning a lot of small pots. He states that you have to be able to read situations well to play poker like this, and as a preliminary search on any internet search engine will show you, Negreanu is second to none when it comes to reading poker players. There are videos of past poker tournaments where his opponents are virtually starting at “Kid Poker” with their mouth open because he has put them on the exact two cards they have in the hole.

On top of contributing many of his secrets to the general poker population through his book, he has also made himself easily reachable via a number of other mediums. He is a regular contributor to Card Player Magazine. He has also been known to stop by some of the better known poker forum communities and talk shop. Finally, his blog on Full Contact Poker is among the most read poker blogs. He updates it 3 to 4 times a week, and addresses some readers’ questions from time to time. Finally, while this may not seem like a big thing, he will even take the time to talk to railbirds, often during big poker tournaments.

Anyone who plays online poker will be familiar with people begging for money in the chat box. Well Negreanu plays at PokerStars (where he is one of their sponsored pros), and what somehow started as a joke, poker players everywhere started sending Negreanu one cent via a PokerStars money transfer in hopes that it would turn their luck around. Negreanu has stated on his blog that he has received over a thousand dollars from this.

His generally good personality, and his willingness to talk to poker fans, has enabled him to join the lists as the next great ambassador that the game of poker needs. It is also with delight that we would like to welcome “Kid Poker” to the Pokerology.com Hall of Fame. 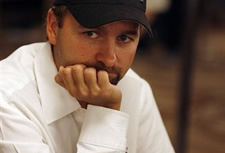 Negreanu has become the next great ambassador that the game of poker needs.