Dan Harrington may have quieted off during the last few years now that he’s in his mid 60’s, but his contributions to the game of poker will be felt long after we’re all gone. But don’t be fooled, even though his tournament schedule has slowed down over the last few years, he still plays great poker, as evidenced by his World Poker Tour victory, and $1,635,365 prize, in April of 2007, making him only one of five people to win a WSOP bracelet (he has two, both in 1995) and a WPT title. As you will learn though, Harrington has his name on more than just one elite list. His self-given nickname “Action Dan” comes off as a joke to some people because Harrington is known for being one of the tightest and most solid tournament poker players to ever sit at the felt. However, his series of “Harrington on Hold’em” books will make sure players are seeking action at tournament poker tables for years to come, and playing at a higher level than they would have previously.

Harrington was born in Cambridge, Massachusetts, not far from Boston. At nearly every poker tournament Harrington enters he is never far from Boston – the Boston Red Sox that is. His lucky green Red Sox hat has became one of the most noticeable staples on the tournament circuit. In fact, many poker players don’t even recognize Harrington without his hat.

As a youngster, Harrington was a bit of “jack of all trades”, when it came to games. His first game of choice, years before poker, was chess. In high school Harrington was one of the best players in the state, and as a young man he won the Massachusetts State Championship, which brought along with it the title of chess master. Harrington also went to Harvard Law School, where he first started playing poker. Two of the regulars at his poker games were fellow poor college students Bill Gates and Paul Allen. It’s my guess Harrington would love to have a crack at them at the poker table now that they are two of the richest men in the world.

A part of his life that Harrington prefers not to talk about is when he was a member of an M.I.T. team that found decided advantages in casino games, first in roulette and later in blackjack. This was decades before card-counting was made famous by the movie “21”. Harrington has said it was not nearly as glamorous as it is made out to be in books and movies. Harrington has simply said that those were “wild and crazy” times, and generally leaves it at that.

Dan Harrington first got into playing serious poker as one of the original members of the elite underground poker club, Mayfair, located in New York City. Other members of the Mayfair at the time included Howard Lederer and Erik Seidel. Eventually Harrington, who had originally joined the club to play Backgammon, took his poker game west to Las Vegas, and the rest as they say is history.

In 1995, Harrington won the WSOP Main Event, and a nice pay day of one million dollars. However most people in the poker world do not consider that his greatest achievement in poker. What many people consider one of biggest achievements is when he made the final table of back-to-back WSOP Main Events. For starters, it was the beginning of what is known as the “Poker Boom”, as entrees to the main event began to triple and quadruple from just a few years before. In 2003, Harrington finished 3rd out of 839 players, and the following year he finished 4th out of 2,576 players. There is debate on whether or not it is easier to win poker tournaments with a small group of elite players or an inflated field of players of all levels, but it cannot be debated that by making back-to-back final tables in this age of poker is something that puts Harrington in a class of his own. On top of the feat itself, Harrington was in his late 50’s when he achieved this accomplishment, showing the stamina of poker players half his age.

In addition to be being one of the best ambassadors of poker, Harrington’s greatest contribution to this game is the books he has co-authored with Bill Robertie. Much like Doyle Brunson did with his “Super System”, Harrington gave away many of the secrets that has helped him win over six million dollars in tournament poker with the publication of “Harrington on Hold’em: Volume 1: Strategic Play” and “Harrington on Hold’em: Volume 2: The Endgame.” These poker books, published in 2004 and 2005 respectfully, are written in a way that almost anyone can understand, which was a nice change from the technical and analytical poker books that were making there way to the market. One of the most talked about things in the books was the position of starting hands. Harrington’s starting hand requirements are one of the most quoted things on strategic poker websites and poker forums alike. Harrington has since published books on cash games, which are also a must have for any wannabe cash game players.

When you combine his genuinely nice personality, and the contributions he has made to the game in book form, it’s a no brainer that he will one day be inducted into the Poker Hall of Fame. But in the meantime we are happy to induct him to the Pokerology Hall of Fame for his efforts at and away from the poker table. 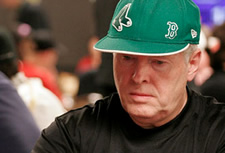 His lucky green Red Sox hat has became one of the most noticeable staples on the tournament circuit.