Poker words and phrases are used regularly in our conversation. Even the absolute non-player is familiar with the concept of “calling a bluff” or “holding ones cards close to his chest”. Poker phrases and analogies are useful in explaining and adding meaning to the day-to-day language of our world.

Similarly, I find that for the intelligent poker players it helps to employ analogies and metaphors from the non-playing world to explain concepts in poker – especially the more complicated concepts that are necessary for success at the higher levels of the game. One frequent metaphor that I apply to poker is bicycle riding.

When I started riding, back in the 1960s, I started on a simple bicycle. It had a broad seat, fairly wide tires, a simple raised handle bar, and exactly one speed. It was ideal for getting around my neighborhood, going over to my friends’ houses, or biking with my buddies to the local candy store. My local terrain was relatively flat and predictable. A one speed bike was perfectly adequate. It was sturdy, reliable, and never broke down. At this stage in my development, not interested in long trips, races, or bicycle maintenance, it met my needs just fine.

As I got older, I fancied myself as a more serious cyclist. I joined the high school bike club. They went on 20-50 mile treks once or twice a week. A couple of times a year they went on multi-day bicycle tours – often over hilly terrain. .My simple “one-speeder” would no longer do. I graduated to a better bike known then as a “10-speeder” – that had ten gears. It opened up whole new worlds for me.

The key difference between this new bike and my old bike was that instead of the one gear it had ten. While I was able to ride up and down hills with my one speed bike, doing so was inefficient, as I had to stand up and greatly slow my revolutions per minute, known as my cadence, when I went up hill, and speed it up significantly when I went down hill. This constant changing of cadence was inefficient – causing me to get tired sooner, and making longer trips much more difficult if not impossible. With ten gears, my new bike allowed me to ride hilly and flat terrain with the same cadence – a far more efficient method of traveling by bike. Even so, to have ten gears, this new bike also had new equipment that needed to be learned and maintained. I needed to develop some skills as a bicycle mechanic to get the most value out of my new purchase. And learn those skills I did – able to fix my derailleur, my hand brakes, and all of the other more finely tuned equipment. It was well worth the extra effort. I never went back.

In poker, a beginner is well advised to learn like the cyclist. Start with one gear. By “gear” I mean style of play. Learn to be a tight and aggressive player – selecting only the highest quality starting hands and throwing away the rest. And when you have those premium hands, bet them aggressively. Typically, in the lowest stakes games that a beginner should start in, just playing in this mechanical, simple, “one gear” will eventually get you the money while reducing your risk of losing money. Most beginners to poker (and poor players) play too many hands – and play them too passively – calling and checking far too much. You can get their money just by being more selective than they. Since they are too poor to either notice how tightly you play, or to take advantage of your tightness by adjusting their style, you make money just by being patient – and by being aggressive when you actually get a high quality hand. Your one speed play will get the money in the long run. Changing your style is neither necessary nor recommended. Trickery is counter productive because, for the most part, your opponents will not be sufficiently observant or consistent for your trickery to work – it will often just cost you money. So stay in one gear when you’re starting out.

But as you progress, and move up in stakes, you will likely face opponents who know the basics and play poker fairly well. The poker terrain, as it were, becomes more varied. Your opponents will not automatically and routinely make the loose calls or passive checks that a beginner or poor opponent would. They will need to be tricked for you to win their money; and they will be attempting to trick you. For those situations you will need to be able to mix it up and vary your play – to change gears so to speak.

Changing gears means varying your style of play, typically by varying the way that you play certain hands in certain situations. Here’s an example. If you are playing your simple, one-speed, tight and aggressive approach in hold’em, for example, you will universally fold a J7 before the flop (unless you’re the big blind and the bet has not been raised). Your opponents, your history at the table, your position – none of that really matters. You will just wait for better cards before you enter the pot – and so you fold this trash holding.

But now imagine that you’re playing with good tight players. They’re a notch or two better than your typical beginner who calls virtually everything pre-flop. They’re all pretty good in that they tend to fold lower quality hands – especially if the pot has been raised. Now imagine that you’re in the eight seat in a full, ten-seat game. Being observant, you have noticed that the two players to your left and then the small and the big blind, will never play a hand that isn’t a premium pair or Ace King if there’s a raise to them. Everyone else has folded and it’s not your turn. You have Js7c. What should you do?

It’s obvious. You should raise and pick up the blinds. You are deliberately playing your hand more aggressively than you might normally play it in order to take advantage of your reading of the remaining players – whom you judge to be so tight that they’ll fold unless they hold one of only a few premium hands. In fact, if they are predictable, you might raise with any two cards in that situation – at least until they stop folding all but their strongest hand. You will have transformed yourself from being tight and aggressive to just hyper-aggressive – a completely different gear.

But let’s assume that these aren’t idiots you’re playing against. This might work one or two rounds before they figure out that you’re stealing their blinds. Pretty soon they’ll stop folding or, if they’re a notch or two better than average, they’ll start taking counter-measures like re-raising you. You’ll have to be observant and flexible enough to change gears again – probably into a tighter player – waiting for the goods before raising the next time, and hoping that they’ll assume that you’re still playing wildly – and maybe re-raising you just when you really have a great hand.

The idea of course is to change your style of play with just the right timing so you catch players when they think your action means other than what it really means. You’re playing more tightly than normal just when your opponents think that you’re playing loosely – and vice versa.

Poker tournaments present many opportunities for changing gears. This is because there are general trends of play that accompany certain stages of the tournament. Typically, for example, players start off a new level by playing fairly tightly. You can take advantage of this by speeding up your game and raising more at these times in the tournament and with lower value cards. Similarly, you might believe that another player is playing this angle. Against him you might want to play especially aggressively – presuming that your excessive aggression might mean to him that you really do have a hand – since aggressive play is unusual for most people at the start of a new round. Or, as another variation of this theme, you might take advantage of the wildness after all remaining players have made the money. That’s a time when many players, especially lower stacked players, throw caution aside – knowing they’ve already made money. You might change to a passive player then, slowing down from your aggressive style right before the bubble burst – when you were taking advantage of players who became timid hoping someone else would be knocked out and they would slide into last place on the money list.

A word of caution, however. Just because you may have the poker knowledge and skill to change gears quickly and often doesn’t mean that you should do so capriciously. Like having a multi-gear bike, the skillful poker player learns to change gears only when necessary – and to suit the terrain. 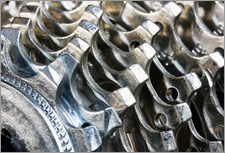 Like having a multi-gear bike, the skillful poker player learns to change gears only when necessary – and to suit the terrain.