Sure, we’ve all been seduced by the glamour, fame and money we see every week in the no-limit hold’em tournaments we see on TV. Championship bracelets, screen time and piles of cash can turn anyone’s head. Even though we may see many familiar faces at these final tables, we’re not seeing the many times that those players have finished out of the money, on the bubble or just short of the TV table.

In an earlier piece (‘To Cash or Not to Cash‘), I examined the role that variance plays in the career of a successful tournament player. But what does that tournament player do when he just misses the bright lights of the TV table? Some may drown their sorrows at the bar while others may slink back to their hotels and ask themselves what went wrong. The best ones, the ones that truly make their living at the game, go to the cash game tables.

On interesting fact that many newcomers to the game may not know is that, before the big tournament boom and the “Moneymaker Effect”, the purpose of poker tournaments was not to offer big events and huge paydays to the everyday player. Instead, the main idea behind poker tournaments was to bring in players for the cash games. In fact, many of the “founding fathers” of the game like Doyle Brunson, Mike Caro and Amarillo Slim Preston did not participate in some of the early World Series of Poker tournaments. Although they know that they could win bracelet after bracelet at will against the smaller fields at that time, they instead feasted on the carcasses of the defeated players who would wander into the cash games.

In the past, most casino hold’em cash games used a limit betting structure. Now, with the explosion in popularity of no-limit hold’em tournaments, players who can’t wait until the next tourney to get their fix can now satisfy their cravings in no-limit cash games. These games have become so prevalent that many card rooms are cutting back or abandoning their traditional $3/$6 or $4/$8 limit games in favor of the more popular (and more lucrative) $1/$2 and $2/$5 no-limit games. No-limit cash games have become so popular that poker author and former WSOP Main Event Champion Dan Harrington has created companion volumes to his famous Harrington on Hold’em tournament strategy guides. His two-book set is called Harrington on Cash Games: How to Win at No-Limit Hold’em Money Games. Many more books, videos and other instructional materials will soon hit the shelves that will focus on the peculiar beast of no-limit hold’em cash games.

Before you jump into these games, even if you are an experienced no-limit hold’em tournament player, you should be aware of some of the subtle differences between tournament and cash-game environments.

When players start a typical freezeout tournament, each one sits down with an equal number of chips. When you take your seat at a no-limit cash game table, you will see a wide range of stack sizes. Also, when you buy into a tournament, you buy in for a set amount. At a cash game table, you can choose to buy in for any amount between the minimum allowed (typically thirty to fifty times the big blind) and some fraction of the largest stack in play. You get to choose if you would rather start out playing as a short stack and push all-in early in the hand with your best cards, or use more deep-stack techniques such as semi-bluffing and bluff check-raising.

The Cost of Doing Business

In business, the term “sunk cost” refers to an expense that, once paid out, cannot be recovered. When players buy into a tournament, that buy-in amount is a sunk cost; the only way to make up for that expense is to finish in the money. In cash games, the sunk cost comes in the form of the rake. The rake is the portion of the pot (usually between five and ten percent) that the house takes to cover the costs of running the game.

In live cash games, the rake can slowly, insidiously and inevitably wear down a player’s bankroll. Although many online poker sites offer promotions where players can receive credit on a portion of the rake they have paid in (also known as rakeback), it can still eat into a stack. Many online veterans who play multiple tables simultaneously must maintain a high level of aggression and steal pots just to say ahead of the rake, especially at the lower limit games that carry a high rake percentage.

One of the main appeals of tournament poker is the ability to “turn a tooth pick into a lumberyard”. The rags-to-riches stories of tournament winners ring of the American Dream – even though three of the last four WSOP Main Event Champions were born outside the US. Tournament winners can sometimes earn hundreds of times their initial investment after just a few days’ work.

Even the best cash-game players in the world can’t hope to earn that level of return in a single week, a single month, or even a single year. If tournament poker is like a slot machine that rewards short-term luck, cash-game poker is a slow grind that rewards skill and patience, much like the practice of counting cards at blackjack.

On the flip side of the coin, while the size of each winning session may not be as impressive as a big tournament payout, smart players recognize that winning cash game sessions will occur much more often than those TV table paydays. A few positive session at the cash tables will make up for several bad tournament finishes with less stress and far less variance.

In a traditional freezeout tournament, if you take a bad beat against an inferior player and lose all of your chips, you are no longer considered to be a player – you are a walking ghost! The dealer announces “Seat Open!” and you shuffle off to the rail, muttering about the inherent unfairness in the game.

Given an adequate poker bankroll, you can remedy that same situation in a cash game faster than you can say, “ATM”. However, before you dip into your wallet, you have to be sure that you can outplay the rest of your table. Remember the old saying, “If you can’t spot the sucker at the table, it’s probably you.”

Luck or skill? Take your pick!

For all of its glitz and glamour, tournament poker also carries with it a huge luck factor. If you love to bet big, raise bigger and take down mountains of chips while ignoring the long dry spells and frequent bust-outs, then you’ll feel right at home at the tournament tables. On the other hand, if you believe poker is less about luck and more about strategy, guile and guts, then you’ll find cash games to be much more rewarding in both the intellectual and financial arenas. 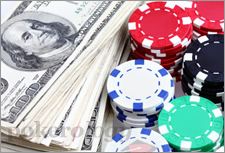