Almost all of the players in the Pokerology.com Hall of Fame seemingly knew from birth that they were poker players. That is not the case with the newest member of our Hall of Fame, Bob Ciaffone. Ciaffone spent his childhood, and a good portion of his young adult life, playing a variety of games including chess, bridge, and backgammon, but it was not until later that he turned to poker. Luckily for the poker community he discovered the game, because his contributions to the game have been immense. From coaching, to writing, to having some pretty fantastic World Series of Poker results, Ciaffone has truly done it all in the poker world.

Robert Ciaffone was born in Brooklyn, New York on December 10, 1940, but his family moved to Saginaw, Michigan when he was still an infant. While Ciaffone has traveled America playing poker and other games, his home to this day remains Saginaw. The first game Ciaffone loved was chess. When he was just four years old he started studying the game at a time when most are still learning their ABC’s. As a youth Ciaffone won many local and state chess championships. At around nine years old, Ciaffone began dabbling in poker with friends and family, realizing that the game was more than just luck, but for the most part he spent this time of his life focused on chess.

Ciaffone began playing bridge at the age of 15, a game he continues to play today. In fact, Ciaffone earned his nickname “The Coach” originally by being the coach of a Bridge Club in 1970. He also founded the “Cavendish North Bridge and Backgammon Club,” which existed from 1975 to 1980. Backgammon, as you will see, was yet another game Ciaffone would go on to master, but with some pushing from his parents he first went to college.

Ciaffone excelled at the University of Notre Dame. As a freshman he was near the top of his class in grades, but predictably, another game garnered the attention of the young Ciaffone. Pool was the culprit this time and just like all the other games, Ciaffone was very good at it. In pool halls around campus he would hustle students out of money. He began making so much money that he wondered why he was going to school. Despite an expected negative reaction from his parents, Ciaffone dropped out of school after just one year to pursue a career as a pool hustler. Ciaffone would eventually take classes to become a teacher, a job he did part-time, but he made the majority of his money playing pool in his early adult years. Eventually the game started to dry up, and he was off to find the next game that could support him.

By the mid-70’s Ciaffone was a high stakes backgammon player, like fellow Pokerology.com Hall of Fame inductee, Dan Harrington. This time period is considered the golden age of backgammon, and there was a lot of money to be made, most of which Ciaffone won. Traveling the country, Ciaffone supported himself by playing and winning most of the premier high stakes backgammon tournaments. He also sought out games against other elite players for big bucks. Backgammon started to dry out, much like pool did, and that was when Ciaffone finally made his way to the poker table.

Remembering his days as a bridge coach, Ciaffone realized he had a knack for teaching people how to play games. While playing poker he began writing books as well. In 1984 he published “Omaha Hold’em Poker.” The book is now in its 3rd edition and had been renamed “Omaha Poker,” but it is still considered the main book you should read if you are new to Omaha. The last edition, published in 2006, added 20 new pages on Pot-Limit Omaha, a game that is gaining in popularity every year.

Also in 1984, Ciaffone published “Robert’s Rules of Poker.” This book was a precursor to what the goals of the Tournament Directors Association (TDA) are today, including unified rules for all poker tournaments, and proper etiquette guidelines. The book is also believed to be the first publication to document the rules of every type of poker and to be available to the general public. Ciaffone applauded the work of the TDA, and has since joined forces with them. “Robert’s Rules of Poker” was originally available to purchase, but now the entire rulebook is available for free. Since the book was first published 25 years ago, nearly all major casinos, including the World Series of Poker, follow the rules that were originally set forth in this breakthrough publication.

On top of his books and poker playing, Ciaffone is arguably the number one authority on poker laws in the United States. Ciaffone founded the Fair Laws of Poker, or FLOP (naturally). The purpose of FLOP is to bring awareness to citizens about just how out of date some poker laws are. Many of the laws date back to the 1800s when poker was seen as a cheaters and conmen game. It is Ciaffone’s hope that FLOP will push state legislatures to make poker laws both up to date and fair. To date, Ciaffone still feels that not one single state has a proper set of rules on file.

While it may have taken a while for Ciaffone to finally come to poker, it took him barely any time at all to make it a better game for all. That is why it took Pokerology.com even less time to make him our newest inductee into our Hall of Fame. 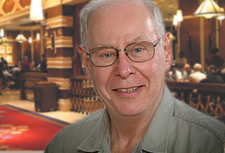 In 1984, Ciaffone published “Robert’s Rules of Poker.” This book was a precursor to what the goals of the TDA are today.