Being a Staked Poker Player

It may come as a surprise to you, but a large number of tournament poker players – the pros that you see every week on television, not the amateurs who take a flyer on an occasional big buy-in event – are staked. They are playing poker on other people’s money, and as a result stand to win only a percentage of what it appears they have won when they make a big score.

Why do they do this? Aren’t these big name pros good enough at poker to make it on their own? The reasons are myriad. But the variance in tournament poker is huge – much bigger than in cash games, and even a good poker player who is probably a winner in the long run can go a very long time without cashing high enough up on the pay ladder to show a profit.

Not only are the swings big in tournament poker, the costs associated with playing are high too. After all, when you play big tournaments in brick-and-mortar casinos, you have to play them where they are, which often means plane fare from your home to the tournament as well as the cost of in a hotel for however long you plan to be there. For someone flying from Europe to Las Vegas to compete in the World Series of Poker, it means factoring in the cost of a hotel, meals, and getting around town in addition to entry fees.

While the top echelon poker players usually don’t have to be staked – Doyle Brunson and Phil Ivey, for example, can play on their own money – the tournament players slightly below them really need to minimize the risks of going broke. It’s also important to realize that Ivey and Brunson are marvelous cash game players who win millions each year in the day-to-day grind of high stake, cash game poker. But many otherwise good tournament players are lifelong losers in cash games, and do not have the ability to build their tournament bankroll this way. To make a living they have to beat tournaments and avoid cash games.

Being staked is the answer. Other players who have the cash at the time stake players, or others stake them – non-poker playing investors who see a chance to make a score by backing a winning tournament player.

Amateurs who take a piece of someone on a one-time only basis stake some players. You can invest $500 or $1,000 to help your favorite pro buy into a $10,000 buy-in poker tournament and share in the rewards when he cashes in the event. Guys who invested in Greg Raymer when he won the World Series of Poker’s main event a few years ago must have felt very happy indeed when he won and his investors collectively reaped a small fortune as a result.

Erik Seidel and John Juanda staked Mike Matusow to a million-dollar payday at the WSOP’s main event. Erick Lindgren backed Josh Arieh when he won $2.5 million for third place in the 2004. Billy Baxter invested in the late Stu Ungar during the 1997 WSOP championship, which Ungar won handily.

But being staked usually means one of two things. You are on a makeup deal, or you’re not. When you’ve struck a makeup deal with a backer, you agree to repay him the costs of entry and fees from tournaments where you’ve failed to cash before winning any money for yourself. The basic staking deal calls for a backer to pay another player’s buy-ins and entry fees, then split the winnings only after buy-ins and entry fees are recouped.

Staked players who don’t cash for four, five, maybe 10 major events can owe their backer $100,000 or more because buy-ins and entry fees get taken off the top before the winnings are split. When a poker player is in the hole for that kind of money, even if he wins an event he may not see much of a payday. So there’s a tendency for players who are on makeup with one backer to terminate that relationship as soon as their agreement is up and find a new backer, where the books are balanced at the outset.

The other kind of arrangement does not involve makeup. Each tournament stands alone, and if the player doesn’t cash in three straight events, but wins $50,000 in the fourth event he plays, he would win his share of the $50,000 and not have to worry about paying makeup to a backer.

On first glance it seems like makeup is a better deal for the backer. But maybe not. There is a tendency for the staked player to bolt whenever he is on makeup and in too deep of a hole. Then the backer has no chance of getting back his investment, the player is out on the street, broke or close to it and looking for another backer where he can start at ground zero all over again.

In a deal without makeup, the backer can take a higher percentage of the money his player wins to account for his added investment. In other words, a backer could offer a player a makeup deal where he is playing for 50 percent of himself, or a deal without makeup but the player keeps only 30 percent of his winnings. The backer assumes all the risk related to entry fees, but will come away with more money if his stake horse is a winner.

Backing deals that do not involve makeup also tend to last longer, because the player always starts from square one in each tournament, and doesn’t have to climb out of a hole to pay makeup before winning any money for himself.

Playing on other people’s money also keeps the staked player free from worry during the tournament itself. When facing a big bet with a strong suspicion that an opponent is bluffing, it’s easier to make that call when there are no worries about surviving in this tournament to win enough to play in the next one. When playing on their own limited bankroll, players may tend to fold that hand because mere survival often becomes more compelling than a desire to win.

Rather than having a single investor stake him for one tournament and risk losing that entire stake, some players develop an investment portfolio of sorts. They might map out ten or 20 events, figure the cost to enter all of them, then sell shares to investors or other players. This method hedges against bad runs and short-term variance. The drawback is a lot of bookkeeping and communicating with backers. But for a winning poker player, this might be the best staking method, since it doesn’t involve digging one’s self into the makeup hole, nor does it run the risk of burning up a backer due to a short term run of bad cards. This method also avoids giving a single backer a sense of ownership over the player.

Suppose an investor and his horse wind up at the same poker table, or perhaps two players backed by the same investor are squaring off against one another? Will one player dump chips off to another for the investor’s benefit? While it’s possible, the penalties for this type of collusion, including a lifetime expulsion from tournament poker events, serve as deterrents.

Nevertheless, the appearance of collusion can be as damaging as collusion itself. While poker has experienced incredibly rapid growth worldwide, it hasn’t consolidated those gains to the point where it can survive a big collusion scandal. Tournament directors have the added job of ensuring that their events are clean, and that includes a game free of players influenced or directed by financial backers.

If you’re looking for a stake, don’t expect it to be easy. First, you’ve got to be a winning player, otherwise why would anyone take a flyer on you? In addition, most investors want to have some sort of relationship with you. This is a character and trust issue. If you cannot be trusted, if your character is called into question, backers won’t touch you. Backing can also provide a measure of prestige. If you were to be backed by Phil Ivey, it conveys a large amount of status and prestige.

If you’re exclusively an online poker player then backing is a tougher nut to crack. Building relationships is more difficult online and there’s little real chance to get to know players who are, for the most part, merely screen names to their playing peers. It’s tough to assess someone’s character and trustworthiness unless you interact with them in person.

Nevertheless, players who meet others in live poker games and brick-and-mortar tournaments can easily build relationships that extend over into the virtual world. If you develop a relationship with a backer or a group of them, there’s no reason why you can’t be backed for online poker tournaments too. One of the added benefits of online backing arrangements, is that your backer can always watch and assess the quality of your play, regardless of whether you cash in a given event or not. If you play well, your backer will know it. If you win money but play poorly, your backer will know that too, and he may well want to get out while the getting is good.

The bottom line is that being staked offers skilled players who do not have a big bankroll an opportunity to play in events they otherwise couldn’t afford, and maybe a chance to earn more money than they could if they played on their own dime in smaller events. The drawback is that you don’t keep all of what you win. It’s entirely a case of circumstances, and this is a decision you’ll ultimately have to make on your own.

3 Responses to “Being a Staked Poker Player” 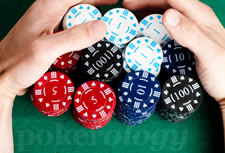 First, you’ve got to be a winning player, otherwise why would anyone take a flyer on you?