Being Hot To Trot and Playing Poker

I often drink coffee before a poker playing session. I find that it helps me focus and maintain my optimum level of play for longer than when I don’t drink coffee. But all of the extra energy that the caffeine jolt delivers isn’t positive. It also makes me very eager to play – hot to trot so to speak. And in poker, I find that this is often a negative.

Poker isn’t like other sports in this regard. In other sports, for the most part at least, intensive desire to win – eagerness – is critical for the winning player. “Quitters never win and winners never quit!” and all that. But poker is different. In poker, eagerness can sabotage optimal play.

There are five ways, chiefly, that being hot to trot in poker (whether by ingestion of caffeine or other means) can hurt your game. Let me identify and explore each in turn. Eagerness to win can work against you by:

#1. Causing you to sit down in a game before you’re really ready to play well

I’ve visited many poker rooms – maybe more than anyone else in the world (nearly 300 at last count). I’ve learned that no two poker rooms have the same rules, the same structures for betting, the same atmosphere, or the same make up of poker players. Each poker room is distinct. There’s something to learn about each room that you should learn before you play your first hand. This takes at least a little time – ten minutes at minimum and 30 minutes sometimes. Often, however, rushing between and among rooms as I often do, I don’t want to take the time to learn what I need to learn before I start to play. Being hot to trot, I take shortcuts – sitting right down as soon as I enter a room. This is a mistake for a few reasons. First of all, I am sitting down without having observed anyone at the table play – keeping me from knowledge that could serve as a possible edge. Second, I haven’t taken the time to learn the local rules, customs, practices and the like that might be useful to know while I am playing. By then, of course it may be too late. Does cash play, for example? I’d have no way of knowing if I didn’t ask in advance. How are empty seats awarded? Seat change buttons? First come first served? Are there any comps, bonus, premiums and such that I might miss out on by not knowing about them? And finally, I haven’t taken any time to calm down, think about what I’m about to do, and get my mind right to play poker. Ideally, I should take some time before playing my first hand in any casino, to get ready to play. If I’m too eager, I skip these steps, at my own peril.

#2. Causing you to play in the wrong game

What’s the ideal poker game for you? I often ask myself that question when I enter a larger room with many different games going. Do you prefer a tightly structured game, where it’s relatively easy to steal the blinds? Or are you better at a no fold’em hold’em game – that rocks and rolls with capped betting nearly every round? Do you prefer Omaha to Hold’em? Limit to No Limit? If you are overeager at the table – hot to trot so to speak – you may miss out for two reasons. First, you might not take advantage of the opportunity to scout out the games to find where the best action is. And second, your impatience might drive you to take the first seat that becomes available as opposed to the first seat in the game you’re best at. Either way, you’ve deprived yourself of some possible advantage in the room – all because you’ve been too eager to play.

#3. Causing you to be too aggressive at the table

Aggression is generally good in poker. But you must learn to pick your spots. Raising in early position doesn’t usually make as much sense as raising in late position. Certain hands don’t lend themselves to raising unless the situation is ideal. Raising all the time is surely a good way to deplete your bankroll. But I’ve found that if I am too eager to play, too wired on coffee for example, I will sometimes be far too aggressive in the manner in which I play my hands. When I’m hot to trot,

in late position – even though it’s much, much weaker. Had I the patience and calmness to sit back and think even for a moment I’d know that. But juiced up as I sometimes get, I might not notice – or care.

#4. Causing you to play too many hands

Similarly, when I’m hot to trot I might be more willing to play bad hands out of position for the big blind. I may be more willing to enter the pot with a call, rather than a raise, just because I’m eager to see what develops on the flop. This error of eagerness is then often compounded by a desire to see the hand through to the turn and then the river – seduced by nervous energy to stay in action. It’s a powerful elixir, eagerness, and it can cause undo looseness as well as aggression.

#5. Preventing you from leaving at the right time

Players with an overly intense desire to play poker may find themselves unable to turn off their eagerness to play. They stay too long, usually trying to get to even This often turns a bad session into a bankroll crushing catastrophe, as the drive to win refuses to admit defeat and insists on staying until the tide is turned. Of course, since they’re well past the point of being able to soundly assess their skill relative to the skill of their opponents, they often magnify their loss until they have completely depleted their bankroll.

As you can see, being hot to trot, though perhaps appropriate for other sporting endeavors, can really hinder your ability to play poker profitably. As such, it benefits the good player to keep on the look out for others who are eagerly looking to dance. They make excellent company at the poker table. 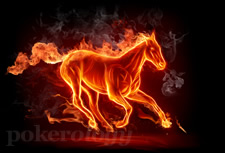 Being hot to trot, though perhaps appropriate for other sporting endeavors, can really hinder your ability to play poker profitably.