Competition has a way of magnifying emotions. Throw money into the mix and a minor annoyance can become the basis for losing a lot of money. The problem is that the poker boom has brought in many new players who do not know what is acceptable behavior at the table. These players either haven’t had enough time at the poker table to learn the proper skills or have only played online poker where most etiquette issues are resolved by simply turning off the chat feature.

Television has exaggerated poor poker behavior and to many new players, this representation is all they have to emulate. True poker professionals maintain their composure at the table and are able to deal with less experienced players and their annoying habits. This is an acquired skill that takes time and patience to achieve. Once you advance to this level of professional play you will move to higher limit games and find yourself surrounded by more sophisticated players. As you continue climbing the poker ladder, recognize bothersome table manner and make sure that you are not exhibiting annoying habits of your own.

Good poker players always consider their hourly rate of return at the poker table. Delays such as taking too long to act and “hollywooding” directly affect their hourly rate. This is especially true in a time-raked game. Interfering with the dealer and constantly forgetting to post blinds and antes also causes annoying delays that cost other players money.

The dealer is responsible for maintaining order and solving problems when a situation arises at the poker table. If the dealer is unable to handle a problem or declare a ruling, he should call the floorperson. At no time should a player feel empowered to spout poker rules or attempt to take control of a situation at the table. It is annoying and often leads to inaccurate information that causes chaos rather than resolution.

Excessive celebration or screaming and berating players is considered poor sportsmanship regardless of the circumstances. Both extremes are bothersome to opponents at the table and often cause players to leave the game altogether.

Leave the analysis to Mike Sexton and Vince Van Patten. No one wants to hear strategy techniques at the table, least of all an opponent you just beat. Do not explain what the player could have done differently to win or your strategy for winning the hand. Statistical analysis of a hand also falls under the category of “annoying teacher habits,” so leave all mathematical odds to the poker calculators and limit the use of the term, “coin flip”.

Once you have seen a player hit runner-runner against a near lock hand, you have seen the most significant bad beat. There is no sense in telling or hearing the same story over and over again. Most people have become adept at ignoring players in the lobby who shake their heads and shout, “You won’t believe what this donkey just did!” It’s the bad beat stories disguised as casual conversation players find most annoying. This includes openings such as, “Tell me how you would have played this hand,” or “You won’t believe what happened at my last table…”

It takes a lot of moxie to bluff on every betting round when an opponent keeps reluctantly calling. At showdown, after an opponent withstands all the pressure and makes that final crying call, the loss can be heartbreaking. The last comment the bluffer wants to hear after conceding the hand is, “I thought you had me.” This may be the single most annoying phrase used in poker. It can serve only two possible purposes: 1.) to prove that you do not know how to lay down a hand when you think you are beat or 2.) to admit that you are a liar. Which would you rather be?

A player who wins a big pot and immediately cashes in and leaves the table annoys other players who want a chance to win their money back. It is especially bothersome if that same player sneaks to another table and buys in for a lower amount in order to reduce the risk of loss. More irritating than a player who hits-and-runs is a walker. A walker is a player who has chips at the table, yet spends most of his time away from the table. This locks up a seat that an active player could take. This includes players leisurely walking as well as those constantly taking bathroom, smoking and phone breaks. This category also includes players who avoid blinds and the worst offender of all: the player who takes an hour-long dinner break and then picks up his chips immediately upon return.

#9 – Talking or Gesturing While a Hand is in Progress

While action is in progress, it is improper talk or make gestures that affect the outcome of the hand. This includes comments such as, “Oh man, I folded

,” or “The flush got there,” as well as moaning or standing when three suited cards hit the board. Even announcing another player’s chip count, provoking action or saying anything at all on behalf of an active player is inappropriate.

#10 – Saying What They Had After Folding at Showdown

Once the hand is complete, there is simply no reason to announce what cards you folded. If you truly want to show the hand, you should show it to the table prior to mucking. If you do not want to reveal your hand, your mission is accomplished by folding the cards face down; no further explanation is necessary. The only clear motive for stating the hand is to deceive opponents, but this tactic is so obvious that any above-average player will pick up on it and simply become annoyed.

You probably recognize some of these annoying habits and may have others to add to the list. Identification is the first step to removing bad habits from your game. The ability to tolerate and not allow others to alter your game is the second and most important step toward becoming a successful poker player. On a positive note, players with poor poker etiquette are also typically poor players. So while their antics may sometimes delay the game and cost you money, in the long run they are increasing your bankroll.

As you continue to climb the poker ladder, maintain your composure and be a solid representative of the game so that other players will emulate your style.

Kelli is the author of the 'Game Day Poker Almanac - Official Rules of Poker'. She lives in Carrollton, Georgia, where she is the state director for the Poker Players Alliance. 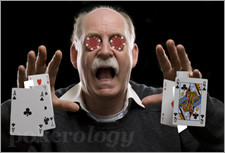 No one wants to hear strategy techniques at the table, least of all an opponent you just beat.