Poker is a demanding game. It requires clear, rational decisions in the midst of a complex and constantly shifting landscape. The more bad decisions we make, the more bad results we get. And in a poker game so many things can influence, interfere with, and generally muck up the decision-making process for us, including a little-known problem called the anchoring bias.

Anchoring is a cognitive bias that describes the human tendency to rely too extensively on one piece of information, the “anchor”, when making a decision. An investor looking to buy a stock might focus too heavily on the current price relative to the 52-week highs and lows, and neglect to take into account the P/E ratio or the future earnings potential of a company. Similarly, a home buyer might zero in on square footage to the exclusion of other critical factors such as the age of the house or the location. Anchoring undermines our ability to see – and then make an informed decision based on – the big picture.

For poker players, this bias can affect us in a number of ways. At any given moment in a poker game, we have many factors to weigh and consider when making a decision. Position, pot odds, number of opponents, playing styles, stack sizes, etc – and that’s just in a cash game. Tournament poker brings a whole new host of new things to take into account. And realistically, most of don’t weigh all these various factors as much as we should because, just like the stock investor and the home buyer, we have a “favorite” factor, a go-to factor, that we consider first and above all others.

One player might overly focus on position and fail to think about stack sizes, while another may fixate on an opponent’s playing style and neglect to consider the texture of the board. “Mathies” will focus heavily on pot odds and counting outs, but it may be at the expense of position and playing styles. For mathematically-challenged poker players, it will likely be the opposite. But the preferred factor becomes an anchor, a liability, because it encourages us to stare at a doodle in the corner instead of stepping back and gazing at the whole canvas.

But anchoring has another application. Whether we’re aware of it or not, humans have a tendency to fixate on the very first value we are exposed to in any given situation. To illustrate: psychologist and behavioral economist Dan Ariely once asked a group of MIT students to write the last two digits of their social security number on a piece of paper. The students were then asked, as a simple yes-or-no question, if each of them would be willing to pay that specific number in a dollar amount for various items that Ariely and his associates had brought to the class, ranging from books to electronics to bottles of wine. Finally, the items were auctioned off as the students wrote down the maximum amount of money they really would be willing to pay for each item. It turned out that the students with the highest-ending social security numbers were willing to fork over significantly more cash than their low-numbered counterparts. The students in the highest 20 percent, social-number-wise, put in bids that were 216 to 346 percent higher than the bids put in by students with low-ending social security numbers.

So in any decision that involves hard numbers or values, the first piece of information we encounter becomes the anchor – even if it’s totally unrelated to the task at hand. For poker players, that usually means the face value of a card. Let’s say you’ve been dealt a small pocket pair in middle position. The UTG player puts in a standard raise. This opponent is fairly new and so you don’t have a great read on him yet, other than he seems relatively solid. Your immediate thought upon seeing this raise is that he has A-K. Now, you know very well that you should be putting him on a range of hands – he could be raising with any big ace, any large-to-medium pocket pair, or for that matter two big suited cards – and on a conscious level you do exactly that because you are a skilled, thinking player and not some yahoo who plays hunches. But on a deeper level, the very first thought that popped into your head, A-K, will become your anchor.

The problem with anchors is that they keep us from moving. As educated poker players, we know that after putting an opponent on a range of hands, the next step is to narrow and adjust that range based on the betting action (or lack thereof) in subsequent rounds. But anchors hold us down. It’s not that we don’t adjust, but that our adjustments will be biased towards the anchor. In the above example, though you may go through the motions of putting the villain on a broad range of possible raising hands, A-K is still at the top of your list and influencing your read.

Suppose it’s just the two of you to the flop. With only one opponent to be concerned about and “A-K” floating in a thought bubble above your head, just about any flop that’s free of aces or kings is liable to fill you with the warm-and-fuzzy feeling that your hand is good. Let’s say the flop comes J-9-9. Sure, you know that A-J is one of the villain’s possible raising hands, but because of the anchoring bias, you may be too quick to discount that possibility, simply because it’s not A-K. Ditto for the possibility that he raised with A-9 suited or even K-J suited.

If your opponent shows strength by betting out on the flop, it’s easy to dismiss that as a standard continuation bet, the kind an opponent would make even if he did whiff on the flop. But if the villain continues to show strength by betting again, that’s another story and the point where most players would at least consider that they’re behind. But a player who is anchored to A-K will be less inclined to give the opponent credit and more inclined to dismiss any bets or raises as bluffs.

Every time you see an opponent call preflop and think, “suited connectors” – that’s an anchor. Every time you think, “he’s on a draw” when an opponent flat-calls on the flop, that’s an anchor. Which is not to say we shouldn’t be trying to put our opponents on specific hands. Of course we should. But you must be acutely aware that getting too specific too early – even if it’s just an instinctive hunch that crosses your mind for a moment – can be very problematic. Once the image of a specific hand enters your mind it’s very difficult to expunge that image later, regardless of what happens in the betting action. Poker is hard enough without anchors weighing us down. 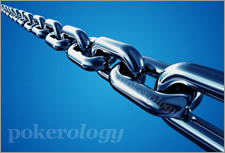 Whether we're aware of it or not, humans have a tendency to fixate on the very first value we are exposed to in any given situation.