April 15th 2011, which has become known as ‘Black Friday’ to the United States poker playing community, changed the poker landscape for the foreseeable future. The Department of Justice’s crackdown on the top online poker sites and the subsequent barring of American play caused more than a ripple through the legions of United States poker players. Well, there is always live play for Americans and the positives and negatives of each format will be the focus of this article. Players who are new to live public cardrooms will need to make adjustments.

I realize that many poker players regularly played both internet and live poker but there is an enormous contingent of online poker players who have rarely or never played in live public games for a variety of reasons. These reasons would include being underage, not having a live venue in their geographic area, feeling uncomfortable playing live poker and a host of other reasons. Let’s take a look at the myriad of differences which will face online poker players who must now begin playing live poker or focus their energies and bankrolls elsewhere. Some of these differences will be perceived as negatives while some, I believe, are positive.

Online poker players who reveled in the ability to play micro stakes will not have a similar option in cardrooms across America. They will have to step up to the “Big Leagues” now which start with dollars not cents. Many will never make that step and just seek out like minded friends and set up home games for their poker outlet. Although I was referring to cash games, this same limitation applies to small stake tournaments which was a major draw for the online poker sites.

One game at a time in casinos and cardrooms… sorry! Many online poker players would play several tables at the same time. They learned that you could increase your profit by playing tighter/more optimally and winning more through volume while lowering risk. Some of these action junkies will absolutely hate being permitted to play just one game at a time. They will have to get used to it but there are also several positives such as studying your opponents when not involved in a hand.

Speed goes hand in hand with multi-tabling. There is no question that online poker is a lot faster in terms of hands per hour. This element has both its upsides and downsides but for players who have only played online poker, the live version will seem to move with the speed of a glacier. You will need to adapt to the slower pace and not become bored and begin to lower your starting hand values or your crossover to live play will become a costly one.

One beauty of online poker is the ability to sit down and play for fifteen minutes in the comfort of your own home. While you may still play a fifteen minute session in a live venue, you need to make a conscious effort to go to the cardroom, possibly need to wait for an open seat, buy your chips and settle into your seat. Of course the flip side of this equation is that you won’t be able to find a $1.00 entry fee tournament with 10,000 players which could take a full day or longer to finish.

Everyone has heard of using a “poker face” and the value it can bring to many endeavors outside of poker such as during negotiations. Well, you don’t need to control your body language when playing on the internet… nobody can see you! You don’t even need to get dressed… you’re just an anonymous player sitting at a virtual table. Poker tells will become a whole new subject for newcomers to live play. Not only looking for them but making sure you’re not telegraphing your own intentions to your opponents.

Some, less emotionally stable, online poker players also seemed to enjoy unleashing epithet laced rants in the chat box. They will need to learn some proper decorum or they could incur mounting dental expenses. When you are actually sitting at a table with real people, some degree of interpersonal skills will be required. So leave the pajamas at home and be prepared to at least be civil.

Keeping track of the pot

The wonders of technology… the online poker player merely needed to look at his screen to see the total of the pot to determine the pot odds for the current bet. Those players will need to learn the art of keeping track of the pot. It is really not that difficult but it does take some discipline and paying attention.

I mentioned that the micro stake players would not have the same spread of games to choose from and need to significantly move up. There are other major impacts relative to expenses moving to live play. You will need to travel to the game which will require gas money, bus fare or even just wearing out foot wear more rapidly. Onliners don’t toke the dealers which is expected in live play. While tossing the dealer a buck as you rake in a nice pot doesn’t seem like too much… do the math at the end of the year and you’ll realize your largess adds up quickly.

If you’ve never played live public poker you may not be familiar with the term string raise. A string raise occurs when your raise is not done in one complete fluid motion. As an example, you put enough chips toward the pot to call the bet and then go back to your stack and take additional chips to raise. The reason this is considered to be illegal is the fact that in the moment between appearing to be calling the bet and now raising, you may glean information from your opponents’ reactions – another nuance of live poker that just doesn’t come up in online play. The best way to avoid this faux pas is to announce your actions verbally. If your intent is to raise the bet simply state, “I raise”.

Handling your cards and chips

Moving to a live play venue will require you to handle and be responsible for your cards and your chips. They will no longer be virtual requiring you to just hit buttons. There are some casinos which have introduced monitors around the playing table and have in effect created live play with virtual dealers, cards and chips. Those outlets are very much in the minority and in my opinion should stay that way. I enjoy handling my cards and riffling my chips, thank you very much! On that note, your opponents will pick up on your ability or lack thereof relative to how you handle your cards and chips. That is not to say you need to be able to expertly riffle (interweaving two stacks of five or ten chips making them into one stack of ten or twenty chips) your chips not to appear to be a rookie… but it doesn’t hurt either.

Personally I’ve always enjoyed live play more than internet but I’m one of those who was playing poker long before the internet even came along much less when online poker made its introduction. If this change forces some to actually venture into a cardroom and begin playing live, I think they’ll come to realize how much they were missing. I believe the group of online poker players who will be effected most drastically will be those that do not live within close range to live public games. To those players who have not been a part of a private home game, I suggest you reach out to friends and coworkers and think about starting one.

The next most affected group will be the micro stake players. There just won’t be anything close to what they have become comfortable with regarding stakes. That being said allow me to offer an encouraging word. If you worked hard to become a winning micro stakes player, you may well find a target rich environment in the lower stake live games. Invest a $100 and find out! The worst that can happen is you get spanked and decide to go back to your favorite online poker site which just banned you from playing for real money and play for “play money” which is pretty close to micro stakes anyway!

Black Friday certainly hurt US poker and we haven’t seen all of the unintended consequences as yet. As an example, one has to wonder how large the opening field at the World Series of Poker will be since the largest contributor of players were satellite winners from the biggest online poker sites. While this focus by the US Department of Justice has disrupted the poker community, the game will go on. I encourage the millions of United States online players to step out and begin playing in the cardrooms of America. Shuffle up and deal… for real! 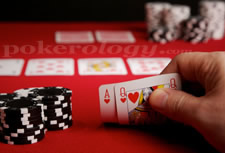 When you are actually sitting at a table with real people, some degree of interpersonal skills will be required.