Acting at the Poker Table

Everyone knows that poker players are actors. All of us, even the newest fish in the pond, knows that it’s important not to give away our hands by looking pleased with good cards or displeased with bad ones. At the very least we learn to act dispassionate.

So here’s the question. Since everyone knows that everyone knows about acting in poker, does it do any good to act? One might conclude that bad players are too oblivious to notice what you’re doing; and good player won’t be fooled. Your best bet, according to conventional poker wisdom, is to display no tells whatsoever – to be inscrutable, rather than to try and fake out your opponent by acting.

But here’s a different take – one that I’ve developed over decades at the felt and in front of the computer. Done correctly, acting does work. The key is to use the right act for the right moment against the right opponent. I call it “schtick that sticks”.

It’s true that against the best in the poker world, you are best to be inscrutable. Great players are expert at divining the true measure of your hand by reading what you do and don’t do at the table. But against lesser opponents, I find that there are things you can do that can cause them to do exactly what you want them to do – not 100% of the time of course. And you may not even be successful more than 20% of the time. But even if your acting helps you 1% of the time, if it doesn’t hurt your game then it will show a profit in the long run.

Here’s an example from a game I was in recently.

I was playing $2/5 no limit at Mohegan Sun – a great poker room in eastern Connecticut. I was at a table with two good (but not great) players and a remaining table of mediocre players. I didn’t judge any to be full-time poker professionals.

I had been rocking around for about an hour – giving very little action – and getting very little when I raised. I had successfully come over the top a couple of times to win some modest pots. But other than that, I was generally inactive.

Two players to my left was one of the two good players at the table. He was aggressive, but not wild, and in general seemed to know what he was doing. He didn’t talk much, but I read him for a guy who knew a lot about the game.

I had raised the big blind with a pair of tens – Making it $20 – a typical if slightly large pre-flop raise. He made it $45. The other players folded. I figured that, tight image that I had, he might be trying to steal from me with his reraise. I called. There was about $100 in the pot.

The flop was three low cards – with two of them spades. I checked. My opponent bet $50. He seemed a little quick with the bet. I wasn’t sure but I thought that he looked a bit weak – just making a continuation bet into what he saw as my weakness because of my check. He had another $900 or so behind him. I had about $600 at this point. If he had AA, KK, QQ, JJ or trips, of course, I was crushed. But I figured he might have any two big cards or even a mid-sized or small pair at this point, and those possibilities greatly outweighed, in my mind, the chances he was very strong.

So I raised to $100 and my opponent called. The turn paired the board. I bet $150, hoping he’d fold. He called. That surprised me. I started to think that he might have a premium pair after all.

The river was a low spade, making a flush possible. I had $350 or so left in my stack. He had me covered. The pot was $600. The conventional play here is to check, hoping either that he is weak and will bluff into me so I can call and win, or that he’ll check it down and I can show down a winner.

But those plays only work if, in fact, I have the better hand. And I wasn’t sure any more. I thought he might have a big pair. So I tried some schtick – hoping to improve my chances that I could bet and get him to fold. I said something really cheesy, like, “Well, I guess I’ll try a bet.” as I pushed in all of my chips.

In short, I exhibited the classic weak means strong tell. I was betting that he was good enough to recognize it as such but not so good that he would see through it to the true weakness that I held. He smiled, looked at his downcards, flashed me his Queens, and then mucked them. Sure, he might well have mucked them anyway, given my all-in shove. Even so, I can’t help but think that my schtick made at least some difference – maybe the difference between his calling and folding.

There are many variations on this theme. Sometimes I’ll use some theater, like staring at the board, to convince my opponent that the board didn’t help me – hoping to induce a bet so I can raise. Other times I’ll give off some hints of weakness by rechecking my downcards when it’s my turn to bet, and then thrusting my chips forcefully – looking to the experienced player like a bluff on my part (the strong means weak tell).

I find there is one other bit of acting that generally works well. Against new players – especially innocent ones (like women who have rarely played in a casino for example) – I find that acting extremely earnest can work to my advantage by convincing innocent opponents to do what I tell them to do. On more than five occasions I’ve gotten a woman to lay down her hand by telling her, very sincerely, that I had a very big hand and that I really thought she should fold for her own best interests. It’s important that you be able to fake sincerity to do this – and that you set it up by being a friendly, affable, and helpful player beforehand. But here’s an exchange that actually occurred.

I had been conversing with a woman on my left, asking her about what she did, where she was from, and the like. I told her, honestly, what I did, about my wife and kids, and about playing poker regularly in a casino. We struck up a poker table friendship. In this particular hand, she had been leading the betting and I had been calling with a flush draw – starting with JT suited. She raised to $10 before the flop. I called. She bet $10 on the flop. There were two of my suit. I called. She checked on the turn after I checked. On the river I looked at her and smiled and then I said that I had hit trips. I bet $30. She checked her down cards. I said, as sincerely as I could muster, “I really think I have you beat and you should fold”. She smiled, looked down, flashed me her Kings, and then mucked her hand. I didn’t even have a pair – just JT and a busted flush draw.

I suppose that for the finicky, this may raise ethical questions. But for me, all forms of acting and deception are perfectly okay at the poker table (in some clubs in the UK, I’ve been told, this kind of coffee housing is prohibited). The bottom line is this: acting does work against all but the best poker players. Just be careful that in your acting you’re not exposing yourself more than you think you are. You don’t want your schtick to get stuck on you! 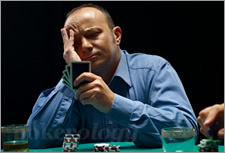 Sometimes I’ll use some theater, like staring at the board, to convince my opponent that the board didn’t help me.