A Tribute to Lou Krieger

“If you can’t explain it simply, you don’t understand it well enough” - Albert Einstein.

Lou Krieger was a master of explaining it simply. I say was because sadly, Lou passed away in December after a courageous battle with cancer. He will be deeply missed.

For those who don’t know, Lou Krieger was the author of 11 books about poker, including “Hold’em Excellence: from Beginner to Winner” and “Poker for Dummies” – perhaps the best selling poker book in history. He was the longtime editor of the widely circulated US publication, Poker Player Newspaper. Lou also hosted a popular weekly internet radio show “Keep Flopping Aces” which ran on the Rounder’s Radio network, and later on Hold’em Radio. In short, Lou was a giant of the poker world.

Lou first started writing for Pokerology.com in late 2009. It was always a pleasure to read his many written assignments – always on time, always on point. It’s what you’d expect from such a pro. Lou loved writing about poker and I loved reading his articles.

Just over a year ago I asked Lou if he’d be interested in making some poker strategy videos for the soon to be re-launched Pokerology.com (which re-launched today…. a bit later than planned). Lou thought it was a great idea. It soon became clear to me that we would need to work together to record the videos. We were never in the same room, because I live in London, England and Lou was in Palm Springs, California. The internet was our saviour. I supplied the hand histories and we recorded the video on my computer while Lou watched remotely. The audio was recorded on Lou’s computer, which I later synced up and edited. It’s complicated even thinking about it, but it worked.

We recorded frequently. I spent many a Tuesday afternoon (early mornings for Lou) on Skype. It was great. I particularly enjoyed our little chats before and after each recording. Even when Lou was diagnosed with cancer and was undergoing chemotherapy, he wanted to continue with our weekly sessions. He was always upbeat and positive, friendly and kind. I will remember Lou fondly. He was a class act.

Lou was also a big supporter of Pokerology.com. He was full of encouragement and enthusiasm for the project and he played such a key role in helping to develop the site. Although Lou has left us, he has left much behind. There’s more to come too. Lou’s voice will continue to be heard here at Pokerology.com for a while yet.

Lots of kind words have been said about Lou in recent weeks. Lou’s good pal Nolan Dalla penned a lovely tribute, titled ‘Remembering Lou Krieger’. Another fine tribute is ‘Missing Lou Krieger’, and there are many more. Lou had a lot of friends.

I’m not much of a writer so I’d like to pay tribute to Lou in the way I shall remember him. This past weekend I spent a few hours going through the video archives and I’ve picked out a few of my favourite bits to share. I hope you all enjoy this compilation. It includes just a few of Lou’s many words of wisdom and his lovely turn of phrase:

4 Responses to “A Tribute to Lou Krieger” 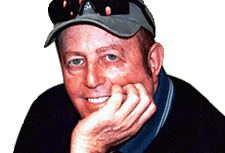 Poker is good for you. It enriches the soul, sharpens the intellect, heals the spirit, and – when played well, nourishes the wallet.